Home
Popular dreams
A dream about a knight 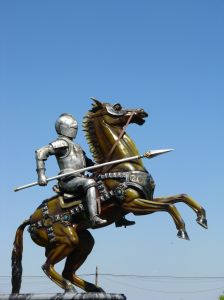 A dream about a knight

A knight was one of the three medieval ideals. Brave, militant, believing and defending the three values – God, honor, fatherland. His role was to protect the weak and aggrieved, to kill monsters, to loyally serve his king and fatherland.

In symbolic, he is believed to be the spiritually introduced person. He symbolizes the journey of the soul to unity, as well as facing challenges and tests.

How to interpret a dream about a knight?

If we had a dream about a knight, it is worth paying attention to the color of his armor, as the color of armor has been believed to be important since the times of mythology. A green knight was connected with the forces of nature, a white one symbolized purity and spiritual enlightenment, a black one symbolized death, while a red knight meant victory and blood…

A dream about a knight may also express our desire to be saved by our internal strengths from a distress, or to help somebody who is in a difficult situation.

Dream interpretation and meaning : A dream about a knight