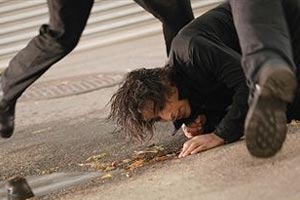 Dreams in which the main motive is an attack, contrary to appearances, may have a positive meaning, although they often turn into nightmares and arouse fear or anxiety in us. How to interpret the meaning of the dream of an attack? All circumstances in the dream should be taken into account. See what the dream book can tell you on this subject.

Attack – the meaning of sleep
The meaning of sleep is different when the dreamer is attacked in the dream, and completely different when he attacks other people. When someone attacks us during sleep, it can symbolize the unexpected arrival of trouble or the intrusion into our lives of other, very negative aspects. Sometimes the dream book interprets a dream about an attack as an announcement of receiving money. The dream of an attack can also express our fear of a seizure or other threat in real life. Sometimes an attack may symbolize the loss of certain values ​​that are very valuable to us.

If we manage to survive the attack of an attacker in a dream, then the dream may mean that we will be able to overcome adversities in real life. Attacking by animals is interpreted as a warning against enemies. A dream about stabbing us in the back or attacking us by surprise may herald the betrayal of friends, so you need to be extremely vigilant. Being the target of an attack in a dream should give us a lot to think about – perhaps we provoked the attacker, e.g. through words or gestures. Sleep can give us clues as to what character traits should be changed in order not to endanger people in real life.

When we attack someone in a dream, it is a signal that we like to be the center of attention. When we attack a specific person, our dream can symbolize hatred or a great deal of resentment towards that person. Attacking a group of people can sometimes herald a flood that will result in the loss of all property. Participating in a seizure usually means letting go of negative feelings – that release will be an argument with the other person. Robbing a bank in a dream, according to the dream book, sometimes foreshadows large expenses.

Sometimes in a dream we are only witnessing an attack. When we observe someone attacking another person, such a dream can be an optimistic omen – thanks to our common sense we will be able to avoid unnecessary quarrels and problems. Sexual assault, in turn, can have many interpretations. Sometimes dream rape can be related to hidden sexual needs and fantasies, and sometimes it is just fear of this happening in real life.

According to the Arabic senator, a dream in which we defend our honor against an attack means that we should be very careful in the near future if we want to avoid losses. Attacking with a soft object is a signal that we devote too little time to our immediate surroundings. In turn, an attack with a hard object is interpreted here as a sign that someone will want to hurt us or we will hurt ourselves.

According to the mystical dream book, if we attack someone in a dream, then it is an announcement that a new family member will appear. Launching an attack promises a lot of fun at home. In turn, repelling an attack is a warning against our surroundings – someone who is nice to us is actually hostile to us. For a man, a dream of an attack may mean that someone is trying to seduce him, he should resist this prospect of romance. However, for a woman, such a dream is a warning that casual sex may end in pregnancy.

In turn, in Grandma’s dream book, all dreams about the attack have a negative meaning. This is usually a warning against incorrect information. We have to be careful – probably someone who envies us, for example, of our successes, will want to do us harm.

One Response for Assault dream symbol

Please describe your dream about Assault