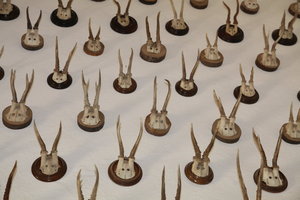 The deer is a majestic animal whom his antlers carry like a crown. Nevertheless, it is meant as a weapon and can express attack and aggression. Antlers can embody mistrust and jealousy in a love relationship in the dream, – primarily, it are to be become ‘horned men, fearing, by a woman what is due, however, often to feeling of inferiority. Old-Indian dream springs interpret the antlers also as a symbol for business and financial growth, – the greater the antlers, the greater the success in this regard.

At the psychological level the antlers show the consciousness for the conflict potential between nobler and the low desires in the dream. One puts on it to those with which one wants to have nothing more commonly. Animal antlers and animal horns always rescue the danger of the separation of charming people or objects in themselves.

At the spiritual level the antlers show supernatural forces, fertility and the refinement of the mind in the dream.

Please describe your dream about Antlers