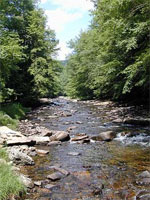 Association: – fluently and actively, – can show dangerous rapids, – can be smooth and quiet. Question: – Which feelings are in me in movement?

River belongs to the old symbols with varied meaning. Deep-psychologically he is mostly understood as a mental-spiritual strength and energy which drives us and fertilises, brings our arrangements to the development and changes the life constantly, besides, however, can also interfere or destroy even. In the picture of the word ‘Life river’ also lies the real meaning which comes up to the river or stream in the dream. If the dreaming moves in a boat or ship on the waters, this stands as a symbol for the life trip. However, the water is in the dream also a picture for the unconscious: If the rivers are tearing or show them an obstacle for the dreaming, this is a tip to a difficulty whose the dreaming is not aware yet. Who dreams of ‘quiet waters’, can be seldom carried away by violent waves of the passions. Who feels drawn irresistibly from the suction of a whirlpool, might be also able in the reality of deep feelings – and have a weakness for ‘fateful affairs’. Who risks a hair-raising white-water journey in the dream, no problem also has in the everyday life to position itself to the challenges of the more violent kind. And who threatens to drown in the dream in a deep river, has underestimated the shallows of a feeling and did not want to proceed to the ‘saving shore’, ‘until the water stood to him up to the neck’. Importantly in connection with a river in the dreamscape are also his shores. They can be inaccessible what points then to mental conflicts or complexes. If it concerns stone or concrete walls, this can mean that the dreaming feels restricted by the modern civilisation or does not come with this rightly. If a bridge appears, however, about the river, these conflicts can be solved, indeed only if the bridge is accessible or accessible. He also rinses some refuse – above all if he leads grey and slushy water, stands for the grief which the unconscious would like to wash away. Floods demonstrate the troubles reasonably which we give to ourselves in the everyday life. Only the clear water of a quietly flowing along river stands for an unconcerned life. Every person would like to be loved at the emotional level and be recognised, because, otherwise, an active life is refused to him. Indicates to be in the river with the things to be a part of a social group which enables to the dreaming to interoperate with other people. According to the accompanying circumstances in the dream one can reach to the above all to be followed interpretations:

? If so, this can point to own need to make clear to itself his feelings.

At this level the river stands in the dream for spiritual energy guided in roads. ‘Everything flows.’ The river is a symbol for the universal possibilities of the fertility, the death and the renewal.

The rivers which have pure, clear transparent water and quietly dahinströmen bring slaves, going to court and people who want to go on travelling, the rivers men and judges resemble luck, – it because, because to be guilty they her wills without account and put through after free judgement, distant trips and movements because her water not stands still, but weiterfließt. If the water is, however, a mud-clouded and it flows out tearing there, she means a threat of sides man and judge and prevents every trip. If they wash any Having and property of the dreaming away and they kidnap it, they do to him quite sensitive harm. They mean even bigger damage and obendrei danger, if they the dreaming even fortschwemmen and particularly if they eject him in the sea. A bad sign is also to stand in a river, to be washed around by his waters and not to be able hinaussteigen, – then nobody, and has he a still so strong mental opposition strength, can probably endure the Widerwärtigkeiten which appear after this dream experience. Wildly flowing out rivers mean thoughtless judges, disagreeable man and the national amount because they roar vehemently and incredibly. Well it is to cross them, especially on foot, – if not wading, thus, nevertheless, swimming. If somebody dreams, he gets not at all to come about the river, and so turns back, he acts better in it if he gives up his plan, any more does not go to court, does not visit at the moment his man and does not take care of the favour of the large amount. If one means to swim in a river or lake, one will get in extreme danger. Since what happens to the fish on the dry, the same also happens to the person in the wet element. Always it is better to reach swimming the shore, than to awake in the middle of the swimming from the sleep. A clear river flowing out in the house prophesies the visit of a rich man in the house to benefit and devout of the inhabitants, – against it indicates mud-clouded, particularly if he wears somewhat from and tears away property of the house with, the act of violence of an enemy who will do big harm to house and house inhabitants. A river flowing out of the house is to a rich and high-powered man of use. He will rule over the community and, make roofed on honour, big expenditures for the public welfare, and many people will come with requests or wishes to his house, – then to all the river is an element of the life. Against it it brings to a poor man the wife or the son or any members of the family in the call of the adultery and the sloppiness. If another water flows cloudily into the house, one will see the same rising in flames, clear water against it indicates increase in possession and money galore. Rivers, lakes and water nymphs are in view of the fathering of children of good premeaning. Acheloos (God of the river of the same name, son of the Okeanos, – he was revered as a king of the rivers and symbol of the fluent water in completely Greece.) means same like the rivers and every drinking water and gives to the dream fulfilments a lot of stronger weight. If one finds to drink nothing or comes to a river, a spring or tank without being able to scoop water, one will manage nothing of him what one strives for. Covet nothing else is than a desire, and drinking satisfies the desire. Somebody dreamt, he is to the river Xanthos (epithet for Skamandros, the man blood vomited cf. Homer (Iliad 21.31following) Ten years because after Homer of the Xanthos was watered so long by the blood of the fallen.) in the scenery Troy become. During ten years the man spitted out blood, however, he did not die as was to be expected because the river is immortal.

One which had taken over the role of his man wanted to put to the proof the interpreter of dreams Sirin and asked him: ‘To Me dreamt, I drink up the whole Tigris.’ Sirin answered: ‘This you have not looked, – it is impossible.’ That had to admit it and said: ‘Thus it is, – not I have had the dream, but my man who has sent me.’ Und Sirin sagte: ‘If you come back, you will find him dead.’ And how he had said, it arrived.

the emperor a river closes

the man him will settle

Please describe your dream about River