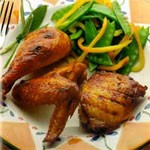 Association: – essential food, – sometimes importantly to survival. Question: – What must I do to be able to survive? Where am I ready to trust?

The meat is in the dream almost always a symbol for material, physical, mostly sexual needs and energy. It can appear as body-conditioned dream contents which indicate the real need for meat, – this seems, for example, by realisation of a diet and vegetarians. With the interpretation of the dream it depends very much on whether the meat is seen in the dream in the raw or cooked or roasted state. Meat courses also stand often for a good food or even for a banquet. Indeed, the interpretation of this dream symbolism may change bit by bit under the influence of the meat scandals. However, surprisingly some vegetarians also dream in the positive sense of the meat what registers which reacts the language of our unconscious substantially more slowly, than our deliberate assessments. According to the accompanying circumstances in the dream the following meanings can stand after old springs also behind it:

The experience teaches that consuming and preparing of meat, apart from a few restrictions, from good premeaning is. Mutton is, admittedly, a disastrous sign for everybody and announces grief in own family (then sheep mean nothing else than people), moreover, also beef because of his toughness, – this means low commercial income because of his low purchase price, – slaves threaten because of the straps and the Ochsenziemers torture tortures. Goat meat registers in general people who are on lake in a storm, rescue, to all remaining bad shops, – ersteren turns away it the dangers because one sacrifices animals of the same name (wordplay to the storm flood: chimaira = goat and cheimon (spoken chimon) = storm), the latter brings it because of the skinny meat only narrow income. In favorable for each is pork, and completely rightly. Since from a living pig nobody has use, however, it is killed, his meat is tastier than that of the remaining animals, – latter against it have living bigger value, as if they are killed. Roasted pork is to be eaten, in any case, a good portent, – because of the fire the material profits will appear more quickly. Simply cooked, it indicates the same profits, however, with delay, while from cooks accordingly prepared brings a profit which is connected with annoyance or preceding expenditures. Consuming raw meat announces something good in no case, – it means the loss of a part of our having and property because of our nature raw meat does not stand. The pleasure of human meat brings after my observation the biggest and highest luck in the dream if it is only not that of a friend or member of the family, – then who has eaten of the meat of a member, will bury this, and he himself (will eke out only with low bites his life). Since it is quite natural that one reaches only under compulsion of big privation, as it is the case in times of war and famines, to such food (according to the God’s law to strictest ones forbidden!) . In the worst of all one, however, it would be to consume the meat of his own son, – it prophesies abrupt death, except, one dreams of eating from those body parts of the son by which this earns his living, – e.g. if he is a runner, from the feet if he is a craftsman from the hands, or if he is a wrestler, from the shoulders. In this case the dream experience gives wealth, to the father use of his son to the son. It is advantageous to eat the meat of all other people, – then anyhow live one on the substance of the others if they use themselves mutually. Always it is better to eat the meat of men than that of women, likewise from children as from old people. Each is good for fowl or goose meat, – fowl brings are of use from women or from lawsuits, goose meat of boasters. Something good also means it to eat game of every kind, – it promises big material profit at the expenses of the property of his enemies. What are meant for enemies with it, the state and the shape of the game will state. Also to eat fish is favorable, particularly the roasted, but just all the others which are prepared in any way the small ones excluded, – this have more Gräten than meat and so mean in no case material profit, but hostility with the narrowest relatives and empty hopes. Salted and eingesalzenes meat of all kind means delays and deferment of planned enterprises, – then by the salt this food for long time will freshly receive. In other cases they prophesy emaciation and grief. Often they also announce illness because they have become mellow by the salt.

Please describe your dream about Meat