Association: – Instinct, – Freßlust, – Bedrohlichkeit, – loyalty. Question: – Which instincts are a menace for me? For whom or does what my instinctive loyalty be valid?

Key words: Affectionately, – powerfully, – smartly, – evasively, – protecting, – discerning, – compassionately, – loyalty, – loyalty, – perseverance, – care, – road finder, – love, – southern soul path. Description: The wolf is associated in the medicine wheel with the internal position of the southern soul path and the love. Wolves are very social animals who live in herds with festival-added traditions and borders. Wolves search partners or female partners for life for themselves as a rule. For a long time the wolf is a firm component of the human imagination where he appears as the lonesome wolf or as a symbol for the wildness and the wild shares of the person. Wolves were spread once about the whole world, then stood shortly before the eradication and now return slowly. Close to the earth trunks had big respect for wolves because own this one so distinctive sense of family and hunt only old and ill members of a kind. General meaning: Your respect with your family and community, – the affectionate side of your nature, – your feelings to intimacy. Association: An aggressive man who pursues his aims pertinaciously and at the expenses of more different, – werewolf, – a name. Transcendent meaning: A protective animal who can teach something about love and family you. Wolf clan apprenticeship: To parts, – clan animal in the November.

Wolf symbolises aggressive desires, instincts and desires, – they can become the danger if one does not control them better. In general he is understood as a tip to an external danger or a hostile person.

The wolf is in natura a very dangerous animal. In the dream he appears as a token for recklessness, aggressiveness and Triebhaftigkeit. The wolf in the dream points to the uncurbable in us, on the second I with which we lie in the constant fight, on the tension state of the soul. Dreams of wolves should arrange us to come with ourselves to the pure one. Personified this animal could be a man who only uses us if we do not make him to ourselves the enemy. To Artemidoros one adjusts us if we see wolves in the dream, – but the Greek dream researcher wiegelte immediately again from: One can recognise this danger easily and protect himself therefore from her.

The wolf means the year because of his name, – the writers call because because of a characteristic of these animals the year Lykabas. Since these are in habit to swim through always in strict order, one behind the other, a river, just as the seasons form the year in her succession. The wolf also calls a violent, robber’s broads, roguish and open attacking enemy. (Artemidor leads the word lykabas (= year) like other authors from lykos (= Wolf) and bainein (= come away).) 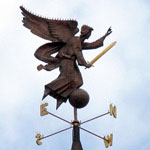 Please describe your dream about Wolf. We update and improve our dream symbols based on your feedback.