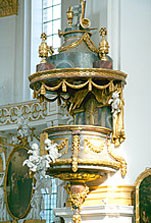 The dream, from the pulpit or from the altar a sermon to hear, means that their contents of the highest authority come who could represent, however, also the uppermost authority of our internal forces. Knowingly for the explanation it is as the sermon was delivered: gruffly or softly, strictly or mildly. Mostly it is the request of the soul on the internal stop. To stand even on the pulpit points out to the fact that one aims at influence and at power about others, inclines maybe also to the dogmatism and stubbornness. Further a strong need to talk to others can be expressed in it.

The pulpit is a separated, raised position of the preacher.

Please describe your dream about Pulpit. We update and improve our dream symbols based on your feedback.