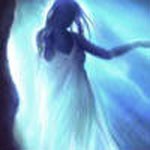 The dream of a ghost produces the connection with old habit patterns. It can remind the dreaming, nevertheless, also of buried hopes and longings which have something insubstantial – maybe because he has not invested enough energy in them. Ghost is often interpreted as the internal voice (intuition) on which one should hear in a concrete situation more. Partly it also indicates fears or feelings of guilt which were edged out, but influence the life furthermore, – often one can uncover them only by psychotherapy again and process finally.

Maybe the dreaming animates old recollections or feelings, so that he can better understand his actions. If the dreaming with the past and dead aspects gets in contact, he can act in Here and Now appropriately.

If a ghost appears in the dream, this should draw the attention of the dreaming possibly to his past being states, – in this case the dreaming should be able to recognise his developing progress.

Please describe your dream about Ghost