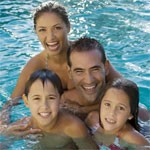 Association: – Used, – group. Question: With which am I ready to step in respect? Where do I feel accompanying?

The first image of the basic security which a child develops hangs together with the family. This picture is often distorted by the circumstances on which the child has no influence. By dreams the person tries to correct this picture again or to confirm also the distortion. Maybe a dream of a quarrel acts with members of the family. However, the interpretation of this dream depends on the dream situation as well as on the actual respect of the dreaming with this person. All future relations are influenced by those which the person has built up first to the members of his family. Family stands for domestic luck, a full, peaceful marriage or partner respect, – either one wishes this and then should take care more of it, or one recognises in the fact that one can be contented and happy with his informal relations. Also the fight for the individuality of a person should take place in the protected area of the family. Nevertheless, this not always is the case. In dreams ‘one manipulates the picture of the joining in members of the family to be able to work through own difficulties without damaging, besides, somebody. (It is noteworthy, by the way that it can have radical effects on the interactions and unaware arrangements between other members of the family if a member of this family takes care of the interpretation of his dreams.) Nearly all problems with which a person can be confronted in the course of his life are reflected in any form also in the family constellation. Hence, in times of big charges dreams of former problems and difficulties within the family often seem. Dreams of own family can be laid out mostly favourably, unless, one has himself in the dream with her überworfen. Members stand in the dream often also for good-minded or bad-minded people in the private life. Because informal relations are so important, the dreams in which members of the family seem can have a particular importance.

typical dream subjects can be the following:

The mother of a man changes in the dream into another woman: The first narrow respect with a woman in the life of a man is to his mother. Depending on the dream circumstances, such a conversion can be positive or negative. For the dreaming it is a sign of his growth if he succeeds in the dream in letting go his mother. In this case the conversion suggests that his perception of women changes (see ‘Anima’ under ‘archetypes’). The father, brother or lover of a woman changes into another person: The first respect of a woman with a man is ordinarily the respect with her father. If she wants to develop and build up full love relationships to men, she must learn to come out of the respect with her father and to handle with her Animus (see ‘Animus’ under ‘archetypes’). The brother of a man or the sister of a woman: They show in the dream often the shade. Often it is lighter to accept own negative sides if one projects them on the members of the family. If one does not look after the resolution of these projections, this can lead later to difficulties in the partnership and in own family. A way often appears to the resolution of such projections in dreams. The aggression pattern between members of the family is rather similar in all families, still it is lighter to work through it in the dream than in the real life. Dreams about the family are so frequent, therefore because most conflicts are experienced first in the informal sphere. In this manner originates a sort of respect stencil which will remain always so when one does not take care consciously of change. among the rest,

in the dream it can come to the following dream situations or dream constellations:

A dream figure consists of several members of the family (possibly the head of the mother on the body of the father): This can be a tip to the fact that the dreaming cannot decide which parent is the determining one for him. Injured members of the family: If members of the family are injured in the dream or seem it in any manner distorted, this can be a tip to the fact that the dreaming is afraid of him or is afraid around this. Returning members of the family (or it are missing every time when one expects it): The dreaming must take care of bigger understanding for this person or, however, for own personality portion which she can represent. Incestuous respect: Such a dream can be a tip to the fact that the dreaming longs for a fusion with the concerning members of the family. The power slope typical for this tender respect makes the still immature sexuality of the dreaming clear. Suppression by the parents: Such a situation releases with the dreaming backlash. This refers to the fact that he must free himself of the behaviour learnt in the childhood to develop as an independent personality. The death of the parents or a parent in the dream can have a similar meaning. Immoderate behaviour of the parents or a parent: This is possibly a tip for the dreaming that he must correct the childish perception after which the parents are perfect and substitute with a realistic one which grants mistake and defects them. Rivalry with a parent: In the first time after the birth a child goes through a phase of the extreme self-centredness which is removed then from a unique respect, ordinarily with the mother. Only late the child develops desire for another respect with a third person. The child is arranged in addition by this new respect to think about his value as a person. If it is not able to bring this successfully to an end, it can outlast in the dream as a conflict with a parent. Conflict between a beloved person and members of the family: The dreaming has still won no complete clarity about his different wishes and needs with regard to each of these both people. To love a person with whom one is not connected about the family, is a sign of the maturity. Members of the family interfere in the dream: This can point out to the fact that family loyalty can get in contradiction to the everyday life of the dreaming. Rivalry between brothers and sisters: This refers to insecurity feelings and doubts, – the dreaming of his family possibly does not feel enough beloved. The archetypes (see ‘archetypes’) slip every now and then in the role of single members of the family and her position within the family. The father symbolises, for example, the male principle of the authority, while the mother stands for nourishing and protecting femininity.

The following dream figures can play a role:

Brother: A brother can show spiritual relationship and rivalry at the same time. An older brother symbolises in the dream of a man possibly experience and authority, a younger however vulnerability and possibly missing maturity. In the dream of a woman a younger brother can express rivalry feelings, but also vulnerability. An older brother performs official duties to her extrovert Himself. Wife / life partner: The quality of such a partnership strongly depends on how himself the man himself perceives. If he had as a child a good, even successful respect with his mother, he will present himself in the dream also as a good husband. He experiences the possible loss or death of his partner in the same manner like the ‘loss’ of the mother. Husband / life partner: In the respect between respect partners it is crucially important as the woman feels her sexuality and the intimacy of her body and how she feels mental-spiritual. Their selfperception is stamped by the connection with her father, and every later partnership will be thereby coloured. If she does not express her selfdoubts and fears in healthy manner, these come in dreams as a loss or death of her partner to the surface, however, they can be also projected on the men of other women. Distant members of the family: (like cousin, aunts, uncles): More distant members of the family appear for usual in dreams either as themselves or as representatives of single personality signs of which the dreaming does not want to take note. Grandparents: Dreams of them can refer directly to them, but also on the traditions and religious positions which they have transmitted to the dreaming. Then only grandparents find out whether they have properly brought up her sons or daughters if these self-own children have. Mother: The respect of a child with his mother is from central meaning for his development. This is the first respect which a child develops, and it should feel them, hence, as nourishing and führsorglich. If this does not apply, fears and doubts can originate. In the life of a man this can entail that he enters dependence relations with older women over and over again or denies his need for a respect. In the life of a woman her relation to the mother also colours all remaining relations. She feels packed maybe in the role to look after the destitute man, or, however, enters relations with men and women in whom she comes not at her expense. There are many possibilities to work off the respect with the mother in dreams, and that which deals with the interpretation of such dreams can take through this big steps in his development. Sister: A sister shows in the dream normally the emotional side of the dreaming. He is able to establish communication with this component of itself, provided, he raises understanding for the personality of the sister. An older sister in the dream of a man can express harassing behaviour, but also care. If it concerns a younger sister, she embodies his vulnerable side. A younger sister in the dream of a woman stands for rivalry and older for ability. Son: A son can show in the dream the wish of the dreaming for self-printout and extra version. Or, however, he symbolises parental responsibility. In the dream of a mother a son can represent their ambition, hope and potential. In the dream of a father he can express unfulfilled hopes. Daughter: In the dream of a woman the respect with the daughter ordinarily refers to a mutual support, although possibly also rivalry and jealousy play a role. In the dream of a man the daughter can symbolise fears and doubts which can appear with the contact with own vulnerability. Father: If the respect with the father is healthy, this expresses itself by a positive father image also in the dream. The father represents authority and the conventional forms of right and order. In the life of a man the father takes over the same-sexual model role (or also not). In the life of a woman the father shows the stencil with the help of which values them all future respect partner. Nevertheless, riper relations are only possible if it frees herself, for example, with support of the dream work, of her father.

At this level the family stands for the spiritual triangle or, however, in general for a spiritual group in which the dreaming feels secure.

In general we have

One Response for Family dream symbol

Please describe your dream about Family