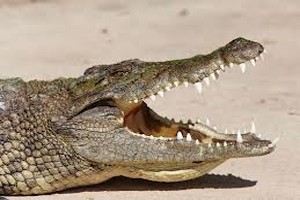 A dream of a crocodile or another reptile shows that the dreaming deals with the fear-exciting lower aspects (above all feelings, desires) of his nature. Maybe he believes to have no control of them, and fears to be devoured by them. It is a negative symbol of our internal energy which appears with dreamers who have not found the right setting to the life. It also symbolises the mercilessness which there is in the world, or bad neighbours who are able to do the life schwermachen to us. The dreaming can be maybe eaten up by his fear of the death or of the death. If the crocodile is chased away in the dream, fight successfully or destroys, we have the strength the dreaming to overcome themselves and to practice discipline, nevertheless, the animal keeps the upper hand, he does not have himself enough under control and should strive not to be guided only towards his desires. If one is bitten by a crocodile, points to a danger.

At the spiritual level a crocodile symbolises the freeing from the limitations of the world in the dream. Moreover, it is a symbol for gluttony and hypocrisy, one of the monsters of the initial chaos.

The crocodile calls a pirate, a murderer or a not less cunning guy (Aelian (about 200 A.D.) describes (De natura animalium 5.23) the tactics of the crocodiles, – they waylay in the reed for those which scoop water from the Nile, and pack her victim at the suitable moment). As well as the crocodile prepares the dreaming, accordingly will prepare by the crocodile called the same.

Please describe your dream about Crocodile. We update and improve our dream symbols based on your feedback.