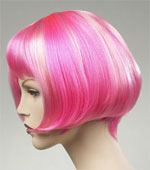 Earlier the wig which covers the head was thus interpreted in the dream interpretation that the dreaming hides his mind, a wrong impression wants to wake or not show his wisdom. A wig, as it is carried by judges in many countries, can also have even today this meaning. A hairpiece or hairpiece is associated with wrong images or unnatural appearance. Wig sometimes points to feeling of inferiority (also sexual) or is interpreted in terms of hair. After old Indian dream books she should promise more respect.

The dream of the wig sometimes warns against dressing up in the awake life with foreign feathers. Often he points if one sees himself as a wig bearer, on the fact that one would like to regain his naturalness it seemed lost. Carry other a wig, one should take before a new acquaintance in eight and be reserved. A wig sometimes expresses that the dreaming has to hide something. Maybe he is not so competent, able thus or is also so youthful as he other people believe wants to make.

At the spiritual level the wig in the dream is an authority’s symbol.