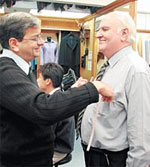 Please describe your dream about Tear(s). We update and improve our dream symbols based on your feedback.