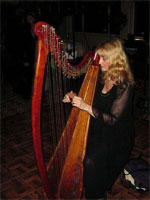 A harp refers to the right oscillation which the dreaming needs to create harmony in his life. Partly chronic Überspannung of the vegetative nervous system which one must diminish is expressed in it. A religiously inspired symbol for special harmony, ceremonious contemplation – but also for longing for death. Depressive people dream more often of this exclusive instrument if they do not finish her problems any more and best ‘to all escape’ would want. They dream of a ‘better world’ completely harmony and carelessness – and ‘to the angel with the harp’. With knobs on: Who plays himself the harp in the dream, has only one raised need for beauty and internal unison with beloved (and possibly idealised) people. Harp sounds can be very beguiling and symbolise the need for an erotic adventure. If the dreaming hears a perpetually recurring melody in his dream, it could be that he should be persuaded to a little bit what corresponds not really to his will. The music instrument hardly to be played as is known probably points also to the fact that to itself the dreamer who saw playing himself or another on it should look after not too highly tense expectations in a certain matter.

At the spiritual level the harp in the dream is the symbol of the leaders which leads in the coming world.

On a harp or a Kithara (The Kithara is a mighty level sound body which continues in wide arms and is covered with seven, nine or eleven strings, – they were hit with a Plektron (percussion instrument).) play is because of the harmony of the tones concerning a marriage and a community from good, for all the other enterprises against it from bad premeaning and leads because of the Spannens of the strings to disputes, however, has announced already a lot of furnace mouth, because strings from tendons (Neura meant in the Greek 1st catgut, 2nd tendons and 3. also nerves, lat. nervi because the early medicine yet did not know the difference between tendons and nerves.) are produced. One has to lay out singing under Kitharabegleitung just.

Please describe your dream about Harp