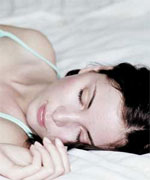 Association: – Unconsciousness, deep relaxation and rest. Question: – Which part of me is ready to wake up?

Sleep (en) sometimes warns about the inclination against closing the eyes before the reality against sinking into illusions against making way the own responsibility. Partly arrangements and qualities also appear in it which wait in the unconscious, until they are woken up and are used. If one sleeps with somebody, points to sexual needs or general longing for dear luck.

If one translates with pleasure with the popular expression ‘There, however, we have slept once more quite a lot’, – in other words: One should wake up to solve, finally, his problems. Maybe, however, we are also in the concept to miss something important in the awake life which could get lost to us irreparably. The sleep in the dream can circumscribe also own conscience (‘a good conscience is a gentle rest cushion’). Nevertheless, the unconscious sometimes sees in the dream sleep a Überbetonung of own decency and would like to remind one to become penetration-stronger. Do we see others sleeping, can we calculate on the fact that they also go not quite awake through the life, so that we them (in the occupation?) can overtake. If we sleep with a partner in the dream, can point to good friendship. Who dreams of getting a good night’s sleep, that needs more rest and relaxation. He must learn, to switch off and not to let wear down himself from the stress and to let be off sick. In very rare cases this dream symbol can also point to the fact that one sleeps too much, that is into language of the dream that one goes too unconsciously by his life.

If one dreams of sleeping himself, it indicates idleness, and one believes to be in falling asleep, this also indicates all idleness and adversities, excluded to people who live in fear or expect tortures, – then the sleep scares away all worries and any fear. To get up after the sleep, however, trade and changes, evil means only to those which are tormented by fear. If one dreams of sleeping in a temple, illness or big worries prophesies to an ill recovery, a healthy, however, – who will recover one from an illness because sleeping of all sufferings überhoben are which other start to attain healing from the gods. In tombs, graves and in ways sleep prophesied sick people the death, healthy shutdown of the shops, – then staying at such places introduces nothing. (It is the faith in the ghosts of the dead people who do her uncanny being in graves. Also the ways with which often graves lay were valid as a place of residence of the minds.) the ritual dreams, the so-called incubation dreams had in old Greece (great importance. Suffer, conflict-loaded, but also healthy who searched help before vital decisions, lay down in the temple to the sleep and waited for a dream revelation of the divinity. The incubation was practiced particularly in the sanctums of the Asklepios, – from that of Epidauros numerous inscriptions with reports are delivered to us by miracle healings by Asklepios.)

brings your Weichlichkeit to your health