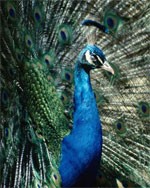 Association: – Proudly and vanity, – exhibition. Question: – What would like to see I let know or admired?

Peacock points to the fact that one wants to shine with others, – this can lead to respect and honour if behind it a real achievement stands, but are also exposed as a craving for administration and boasting.

The peacock is valid as a classical rebirth symbol. In the antiquity the peacock was the bird phoenix which lives after the myth 500 years, then burns and from his own cinder reincarnates. In the dream it has the same meaning and is, hence, a positive dream symbol. Who sees a peacock in the dream, is made happy about the coloured variety of the life, can compensate contrasts and come to mental correspondence with being close people.

It is a solar sign by his wheel, however, also symbol of the vanity.

The nice and lovely animals, like the peacock, call fop.