Association: – Torment, – spiritual tortures. Question: – What is I to be misdealt or other ready?

It is the archetypal symbol for the sin and for ‘pangs of conscience’ par excellence which also in our today’s – released from infernal fears for the purposes of the religious ‘penal threat’, nevertheless, extensively – understanding at unaware level unlimited looks. Hell mostly encloses the edged out psychic contents from which a person suffers, until he has accepted them and has consciously processed, – besides, often it concerns fears and feelings of guilt. Who has nightmares of the hell, lives through just an ‘infernal situation’ (or is afraid of it) and it is most often about a ‘feeling hell’, around hatred, jealousy, suppression and emotional extortion in the partnership situation or family situation. Always intolerable living conditions are meant with it if somebody says (and dreams): ‘This is simply the hell for me! ‘ If recur nightmares in which the hell appears vision, this is a sign for a serious personality disturbance of the dreaming. The fire in the hell and the tortures to be suffered verbildlichen suppressed sexual wishes or in general propelling wishes. However, at the same time the hell can stand for purification which one must keep up to change behind the life unloaded from the past. This is sometimes stressed if one is released in the dream, finally, from the hell. There are even known dreams in which the hell appeared quite pleasant place.

It is a symbol of the darkness and the territory tolerated by God of the devil. 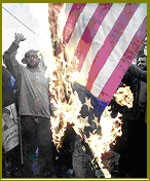