The analysis of the dreams in which one had guests closely hangs together with the feelings concerning these guests. Was one called his guests with open arms welcome, or did one take up them only with reluctance because they gave to anyhow fear? Did they cross the door threshold? A welcome guest maybe shows the beginning of an important new project which one finances, – the dream shows own readiness to take up the employment on it now. The unwelcome guest is somebody or something which one does not want to face up. If one has decided what the dream company really shows, one should consider whether one should not take over this undesirable responsibility, nevertheless. Maybe help a soon other dream.

Guest is often interpreted in the similar sense like stranger. Were you yourselves invited? Then you search or need more allowance and attention. Their social contacts might be reduced to a necessary minimum. Who dreams himself in the role of the host, has (currently maybe suppressed) need to look after others, but to shine also by own generosity. One wants to ‘be used’ to get for it attention and affection. However, maybe he also appears because one really expects guests and deals with the preparations, or he points out to the fact that one should not isolate himself so strongly from others. A frequent dream of phases of the (involuntary) seclusion or isolation. 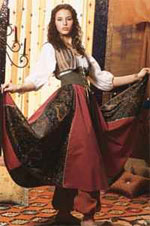