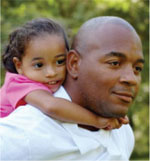 Association: – Authority, – control, – guidance, – recognition. Question: – What do I look after?

Father stands partially for the relation to own father and/or makes clear those traits which he has influenced by his education, – behind it one recognises the not seldom neurotic disturbances which were founded in the childhood. However, he can also point to a strong influence by a father-figure with an immature personality. In general he symbolises masculinity, energy and energy.

The father is a symbol for traditional order and natural authority in the dream. The archetypal representative of the rational, function of the active consciousness and the will. The father in the dream is mostly the mediator the purpose in life engaged in the mind, but also element of the traditional. If the dreamer has or had a good relation to own father, diminishes this by the unaware conflicts and leads us as it were in his hand certainly on the right way. In the dreams of adults the father appears either as the helpful figure which recalls the longest forgotten apprenticeships of the former father to the memory or as the personality side stamped by the father of the dreaming. In the dreams of youngsters the father is an opponent in the dream mostly. With this picture a generation gap can be expressed if the father appears in others than natural shape. The dream consciousness thereby wants to help the dreaming to separate from childish father’s images and to recognise the father as people like other also. With daughters he often translates the first lover, with women in general also the husbands or – in badly running marriages – the longing for a new long-term relationship and reveals the desirable picture stamped by him of a partner. Women dream far frequent of the archetypal father-figure which must appear in women’s dreams and not necessarily show the bodily father. This is typical for the security striving of the woman (who protects herself as a small girl of the father and felt supplied). However, on the other hand the father is valid the mother the father always as the punitive in the dream also as the personified bad conscience (particularly if allowed to act), particularly in view of frequent partner changes. With sons it is more the authority’s figure, the model, but also the rival, the husband of the beloved mother. (What Freud closed by the Oedipus complex, because Oedipus has killed, as everybody knows, his father and has married his mother.) Who dreams of the late father with whom him at his lifetimes a bond of trust connected, advice and help receives in a tricky situation. Who himself becomes in the dream the father, even if should not apply in the awake life at all, has in the life everyday life maybe a kindling idea for which it is worthwhile to exert itself with vigorous endeavours. However, in general the whole dream must be looked very thoroughly, because the father is a very ambiguous dream symbol.

her lovers a wrong play with her do