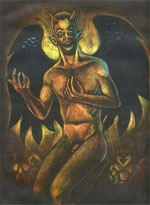 Association: – negative forces, – temptation. Question: – What lies between me and my higher consciousness?

To dream of the devil ordinarily means that the dreaming with those poach, to primeval sides of itself must come to the pure one which are unknown to him and frighten, hence. The dreaming must confront himself with this part and provide for the fact that he works for him, instead of against him. The devil loses his power if he has recognised him first of all as something what belongs to every person and with which one must confront himself necessarily sometime once. Devil embodies those feelings, wishes, desires and passions which one rejects consciously though by which one is strongly influenced from the unconscious, however, and is damaged. One must learn to accept them consciously and to change.

Today though no one more believes, actually, in the devil than vision he seems rather frequent, however. Often this is with people the case which does not process a religious problem, but have already edged out. Then the devil points out to how important the discussion with the sense of the life is for the internal stability of the dreaming. With the people who have an excessive morality understanding it can also be a tip that they should stronger accept the natural-like in themselves. In Goethe ‘fist’ the devil’s figure Mephisto is a very intellectual appearance. Hence, the devil as a vision can also point to the dangers of a much too intellectual thinking. The devil is a fallen angel and uncovers ruthlessly weaknesses or weak places in our soul life. If one sees one and one speaks with him, one should not watch out for a person in his vicinity, wohlwill. If we are attacked by a devil, we act in the awake life slightly greedily or ungallant. However, he can also point to one-sided thinking only directed on profit. The devil in the dream is as a personification of the bad shares of the person the object to which he can offer the forehead. If of the dreaming fear of his passions, before his fury and his feelings has, this can manifest itself in the dream as a devil.

He symbolises all forces which bring confusion, darkness and death. Sometimes it is maintained that the difference is only very low between friend and enemy. Maybe it is worthwhile for the dreaming to start with itself if he wants to recognise any form of evil or wrong behaviour.